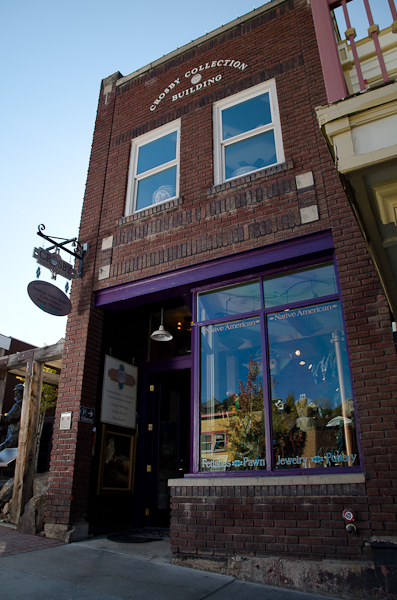 The Crosby Collection Building is one of the most significant historic structures on Main Street.  It links Park City’s resort town present with its rough and tumble mining past.

The building was constructed in 1922, as an auxiliary to the already historic Oak Saloon.  The Oak first opened in 1902, with Henry Spriggs presiding.  Spriggs was a towering figure in town, said to be Park City’s equivalent to “Diamond Jim” Brady.  Sawdust on the floor and swinging doors, the Oak took its name from its thirty-foot long oak  bar.

The annex was used as the restaurant section; and, to provide a more genteel ladies’ entrance.  The tale is told of a 1910 robbery of the patrons of the Oak, by two gunmen, one of whom called himself “Kid Porter.”  That is a name used by the Sundance Kid early in his career (and a bunch of other toughs, trying to cash in on his name!).

Prohibition turned the Oak into an ice cream parlor.  By the time it was legal to drink adult beverages, again, the Oak ice cream had become an entrenched favorite with the kids in town.  While reclaiming its spot as Park City’s premier saloon, the Oak continued to serve ice cream and soda to its younger clientele.

The 1950’s were not kind to the Oak, or most of Park City, for that matter.  The 60’s brought serious skiing and the promise of prosperity to town.  Some how the Oak never accommodated to the new ways.  A series of owners tried; but eventually the Oak Saloon was converted into a dress shop.  In 1974, the larger, old wooden part of the Oak burned to the ground; but, the brick annex survived.  Since then, it has been a newspaper office, a cigar store, and an arcade, among other things.

The Crosby Collection, a  long time Park City business, moved its gallery of contemporary and vintage Native American collectibles into the space in 2004, when owners, Bing and Vickie Crosby bought the historic building.