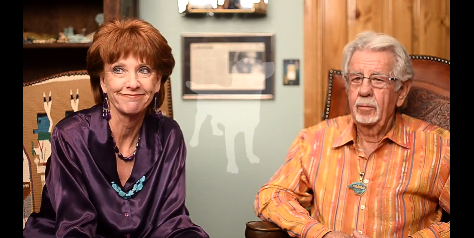 Owners Bing and Vickie Crosby were brought together by their love of the Southwest and the Native American culture that so permeates the region.

Born in Oklahoma and raised in New Mexico, Bing grew up during the heyday of Old Route 66. From his parent's landmark restaurant along a stretch of the famous highway in Albuquerque, Bing first fell under the spell of the Indian arts and crafts. Before long, while still a schoolboy, he was trading meals for the pots and pendants local craftsmen would bring to the cafe. “They possessed the souls of true artists,” he says. “Back then, Native American art was not widely understood but even as a child, I wanted to show it to people.” And he did, setting up a small concession space at the restaurant, the very first incarnation of Crosby Collection.

Between 1958 and 1974, Bing established and built a business employing many Native American artisans in the production of traditional jewelry. He also represented Indian artists while promoting and supporting tribal ceremonials and other juried competitions. Bing himself has been acknowledged for his particular expertise regarding pottery, weavings, jewelry and turquoise. He developed an international wholesale clientele, including galleries and museum shops, while traveling more than 70,000 miles a year and participating in 9 major gift shows annually. Since 1975, there has been a Crosby Collection presence at the famous Houston Livestock Show and Rodeo. For more than a decade the Crosbys maintained a store at the Salt Lake International Airport.

While transitioning from the road to retail, Bing found an enthusiastic partner when he met Vickie Crosby. She was a traveler herself, already well known in the industry for her representation of southwestern jewelry. A child of the desert, Vickie was born to an Arizona ranching family and credits her prospector grandfather with educating her eye for silver and stones. Her sense of style is a hallmark of Crosby Collection inventory. Says Vickie, “We're very careful about what we acquire in terms both of quality and authenticity.” They are full members of the prestigious Antique Tribal Arts Dealers Association (ATADA). The Crosbys have supported many efforts to establish and maintain high ethical standards for dealers, artists and collectors.

In 1990, Crosby Collection opened in Park City, Utah, and in 2004 found a permanent home when Bing and Vickie bought the historic Old Oak Saloon building, which they have restored to its Old West boom town best.

The Crosbys have  a number of longtime clients with whom they have worked to build noteworthy collections. It is an aspect of the business that continues to bring great enjoyment to both of them.